Valley City State University has a long and proud history. Since our beginning as a small normal school, we’ve grown into a notable state university with big plans for the future. Read about the men and women who have led us to where we are today. 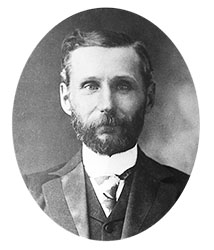 The Valley City State Normal School opened on October 13, 1890 with J.W. Sifton, M.A., Ph.D. (previously a pastor at the Valley City Congregational Church of Christ) as its principal. According to the Valley City Times-Record, its purpose was to give instruction in the Science and Art of Teaching to prepare teachers for the efficient discharge of their duties in the Public Schools of the State. With no legislative appropriation to support the school, it was initially housed in a room at the City High School, then moved to various locations around town. While the location and funding for a permanent facility was negotiated among various entities, Sifton surprised the school’s Board of Directors when he suddenly resigned and “took the train for the west.” 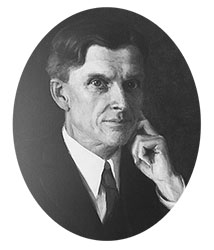 In December of his first year, the school moved from the McDonald Block into a building simply known as “the Main building,” which over the years became known as “Old Main.” Other construction during McFarland’s tenure included two dormitories (East and West Halls), a science building with auditorium just west of Old Main (now known as Vangstad Auditorium) and an Industrial Arts building at the rear of the Main building. In 1920, the old wooden footbridge that joined campus with the city of Valley City was replaced with a steel wire suspension bridge that remains a prominent feature of the beautiful campus.

During McFarland’s tenure, the school grew from 35 students and 9 faculty to 1,343 students and 59 faculty. He retired in 1918 under political pressure from the Board of Regents but was widely praised for his performance and generally recognized as the “father” of the college. In recognition of his contributions, Old Main was renamed McFarland Hall. 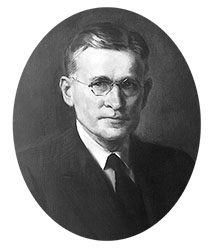 Throughout the McFarland years, the Normal School offered one and two year certificates that qualified graduates to become teachers. In 1921, the school was authorized by the State Board of Higher Education to extend its classes to four years and grant bachelor of arts degrees in education. With this, the “school” became a “college” – the first teachers college in North Dakota. This led to the school’s name being changed to the State Teachers College in Valley City.

One of the hallmarks of Dr. Allen’s presidency was repeated requests to the state for funding for a badly needed college library. These requests were not to be granted until well after his tenure ended. When the facility was finally completed in 1952, then President Lokken would dedicate it to Dr. Allen by saying, “The college has long sought a library building to meet its needs. Wars and financial disturbances prevented previous administrations from realizing the goal. President Carlos E. Allen kept the hopes of the college alive from 1918 – 1936.” 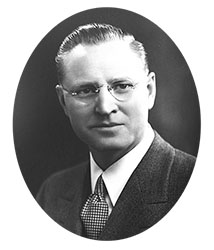 A graduate of the Mayville State Teachers College and the University of North Dakota, Dr. Weltzin was the first president to have been born in North Dakota. His tenure was brief as he had incurred the wrath of then Governor Langer by taking part in public condemnations of the governor for his attempts to pressure university employees to make political contributions. Langer would eventually veto the entire appropriation for the college, requiring a special session of the Legislature to be called to re-pass the appropriation. Dr. Weltzin was granted a leave of absence shortly thereafter, and a faculty committee was given responsibility for administration of the school. Arthur Gamber, a Professor of History, observed this committee during one meeting and commented, “I’ve always thought this institution could get along without a president, and now I know it!” 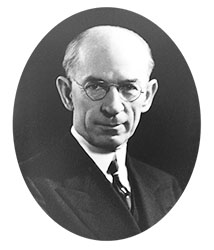 Named as acting president during President Weltzin’s leave of absence, Cox came to Valley City during some of the most financially difficult times in North Dakota history. An increase in enrollment combined with a decrease in appropriations caused severe financial hardship for the school. To make matters more difficult, the American Association of Teachers Colleges warned in 1939 that the school must show marked improvement within the next three years. His tenure ended three years later in 1942. 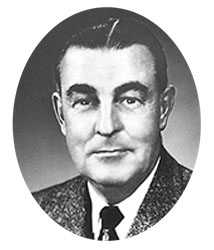 Dr. Kleinpell’s presidency included all but a few months of the American participation in World War II. During this time, the College offered courses designed to fulfill shortages of men qualified in such areas as electricity, machines, and the principles of aerodynamics. Women were encouraged to pursue education for such fields as stenography, engineering, home economics, mathematics, meteorology, and nursing. In 1943, the College was selected to take part in the V-12 Program to ensure the Navy of a flow of professionally trained men. Dr. Kleinpell left in 1946 to become the president of Wisconsin State Teachers College at River Falls. 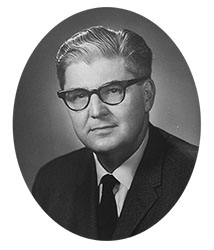 Lokken brought a focus on accreditation as a testament to the quality of the university’s teacher education programs. In 1946, the College was accredited by the American Association of Teachers Colleges, then in 1948 by the American Association of Colleges for Teacher Education (AACTE), then in 1959 by the North Central Association of Colleges and Secondary Schools, and finally in 1954 by the National Council for Accreditation of Teacher Education (NCATE). Since then the College has retained its accreditation without interruption, a remarkable track record of consistency meeting this gold standard of teacher education.

Although the University’s emphasis remained on teacher education, various bachelor’s level and 2-year junior college programs were added or expanded over the years under Dr. Lokken to serve students who were pursuing other careers. In recognition of this, “Valley City State Teachers College” became “Valley City State College” in 1963.

Lokken is remembered as one of the “giants” who played a major role in building the school. Lokken Field is named in his honor. 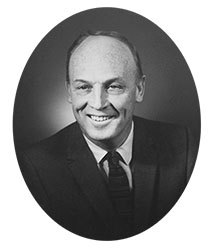 Dr. Rose is known for placing emphasis on the revitalization of the alumni program and establishing the V-500 scholarship program which remains today the primary source of academic scholarships for VCSU students.

Construction during his tenure included the L.D. Rhoades Science Center (which opened in 1973), Snoeyenbos Women’s Dormitory (1971), and Theatre 320. Several academic programs were offered for the first time including a Bachelor of Arts degree for an art composite degree and a Bachelor of Science in Education in industrial education. An ROTC program was also established. 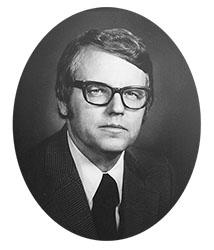 The DeVries years were characterized by several curriculum changes to keep up with world changes. New majors included medical technology, business aviation and computer science. An alternative learning program was initiated to improve services to non-traditional students. The College established a licensed day-care center that enabled older-than-average students to obtain a college education.

Recruitment was also strengthened, and freshman matriculations showed a sharp increase, particularly among students choosing one and two-year programs. Enrollment increased from 861 in 1975 to 1,217 in 1980. Retention efforts were also strengthened under DeVries, including new efforts to counsel students planning to drop out or transfer.

These years also marked the retirement of various prominent staff members, including Willis Osmon who retired in 1982 after serving as Athletic Director for 35 years. The college Fieldhouse was named in his honor, and Homecoming festivities still feature the annual “Osmon Fun Run.” 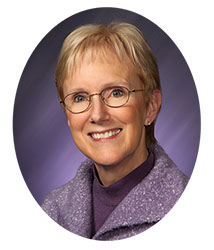 Under a unique arrangement, Dr. Chaffee initially served as president of both VCSU and Mayville State University, but became dedicated solely to VCSU in 2002. Her tenure was marked by a number of innovative and progressive moves that earned national recognition and will define the university’s personality for years to come.

In 1996, VCSU began a program to apply technology to enhance the learning experience. A first step was to become a “laptop university” by implementing universal computer access for faculty and students. VCSU was only the second in the nation to take this step. In 1998, VCSU was recognized on the list of “Best Colleges” published by U.S. News and World Report  and has continued to earn this recognition every year since.

In 2005, VCSU reached a major milestone in its history when the State Board of Higher Education authorized the university to offer a Master of Education degree, marking the first significant change in the university’s status since 1921 when it was authorized to offer bachelor’s degrees. Dr. Chaffee retired in 2008. 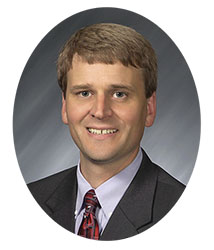 Steven W. Shirley became VCSU president in July 2008. Under his leadership, VCSU experienced sustained enrollment growth, made key additions to its academic offerings and completed the $10.3 million expansion and renovation to Rhoades Science Center, among many other achievements. In each of his last five years, VCSU was ranked either the No. 1 or No. 2 public regional college in the Midwest, according to U.S. News.

Two academic centers – the Great Plains STEM Education Center and Prairie Waters Education and Research Center – were established at VCSU and Shirley played the lead role in establishing the North Star Athletic Association, VCSU’s athletic conference in 2013. Shirley also led VCSU through the Sheyenne River flood of 2009 which precipitated the early closing of campus and the continuation of the semester through distance learning technology. 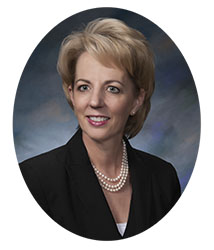 Tisa Mason came to Valley City in December 2017 from Hays, Kan., where she served as vice president for student affairs at Fort Hays State University.

In her three-year tenure at VCSU, Mason fostered a collegial, inclusive spirit that helped the university navigate through budget cuts stemming from the economic downturn in North Dakota, and her structured approach to strategic initiatives helped set the course for continued success in the future. President Mason fostered support and encouragement through recognition and celebration, and record enrollments, national recognition, successful reaccreditation efforts, the achievement of strategic planning goals, and student academic accomplishments were celebrated.

Mason also recognized the efforts of her predecessors, celebrating the completion of initiatives begun before she arrived in Valley City but completed or occurring on her watch. The ribbon was cut on a newly renovated Vangstad Auditorium in May 2016; the first phase of Valley City’s flood protection to protect campus was completed in summer 2016; the 20th anniversary of the start of the laptop program was celebrated in September 2016; and the Gaukler Family Wellness Center opened in November 2016.

There were also plenty of new initiatives during the Mason era. The Master of Arts in Teaching program was added in fall 2016. A data-driven analysis produced methods to more effectively leverage student financial aid packages and enhance enrollment numbers, and strategic initiatives to capitalize on academic growth areas and enhance retention and completion were begun. Pathways to three-year degree programs were identified and strengthened, and the implementation of free OER (Open Educational Resources) in place of textbooks was emphasized. In addition, a state-of-the-art heat plant was constructed, with a plan to add an innovative, income-producing activated carbon plant to the facility moving forward. 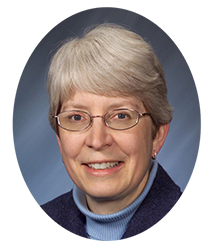 Margaret Dahlberg, VCSU vice president of academic affairs from 2009 to present, served twice as VCSU interim president: between the presidencies of Steven Shirley and Tisa Mason, and then again between Tisa Mason and Alan LaFave.

As interim president, Dahlberg put her signature on VCSU’s strategic plan and successfully led the university through a period marked by budget cuts and declines in state funding. She also embraced and emphasized the VCSU vision statement – “As an innovative university, we deliver distinctive, learner-centered experiences” – encouraging and supporting innovation while strengthening VCSU’s core programs. The trend of enrollment growth at VCSU also continued under Dahlberg’s leadership.

As a child, Dahlberg attended the Model School of Valley City State Teacher’s College when her father, H.O. Pearce, served as school superintendent. The Pearce family moved to Platteville, Wis., during Dahlberg’s childhood, but she returned to Valley City State as an English professor in 1996. 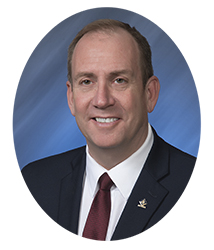 On September 27, 2018, The State Board of Higher Education selected Alan D. LaFave, D.M.A., as the next president of Valley City State University. For more information on Dr. LaFave, please visit this page.